The Consequences of Inflation in the Wider Atlantic

Inflation is back on the agenda. The rise of inflation occurred in the aftermath of the global activity rebound out of the COVID-19 when global value chains were severely disrupted and have been contending to recover since then. The Russia-Ukraine conflict added new strains over the global economy, raising energy and food prices. Inflation brings more uncertainty in the operation of an economy and introduces new transaction costs for economic agents, constrained to hedge against it. A more granular assessment indicates that vulnerable households were severely affected on two fronts. Their real disposable income shrunk while at the same time their savings slushed considerably, as their holdings are not generally inflation-immune. Besides, the aggressive reaction it generated from macroeconomic policy makers and its implications worldwide, this inflation trend could be the catalyst of ongoing transformations. It could strengthen even further the hand of those preaching globalization and advocating for self-reliance behaviors. In addition, inflation can also lead to questioning the balance of power between workers and capital holders, heralding a new era in labor markets negotiations.

- Are we heading toward a new inflation age?

- What are the drivers of today’s inflation and how similar/different is it from the 1970s?

- How can domestic policies cope with this issue? Can a collective international response prove to be effective?

- Beyond classic implications, can this inflation trend trigger more profound transformation of the worldwide economic system? 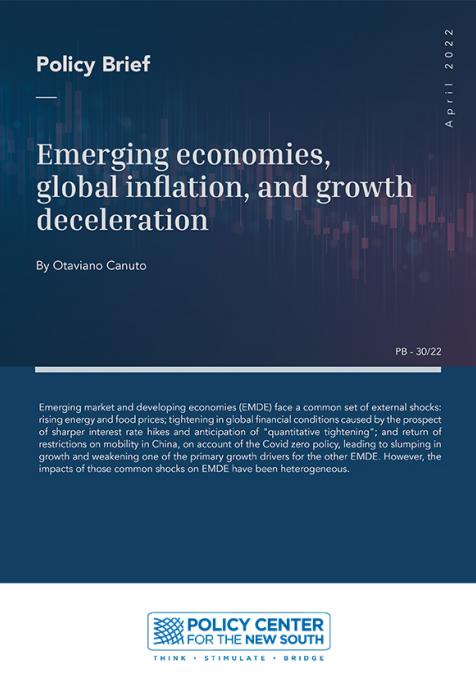 Emerging market and developing economies (EMDE) face a common set of external shocks: rising energy and food prices; tightening in global financial conditions caused by the prospect of sharper interest rate hikes and anticipation of "quantitative tightening"; and return of restrictions on mobility in China, on account of the Covid zero policy, leading to slumping in growth and weakening one of the primary growth drivers for the other EMDE. However, the impacts of those common shocks on EMDE have been heterogeneous. 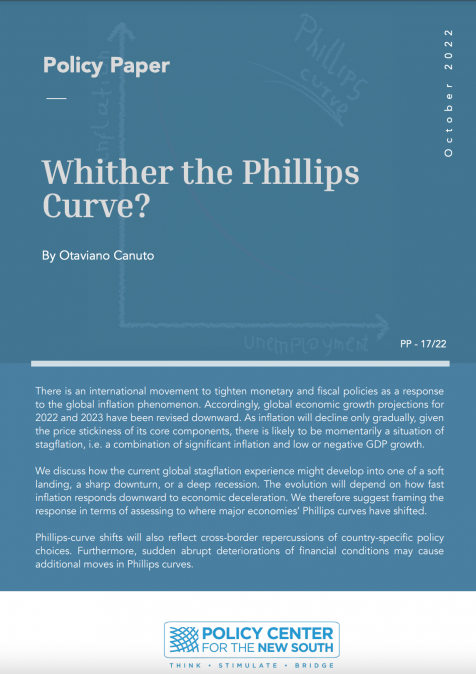 Whither the Phillips Curve?

There is an international movement to tighten monetary and fiscal policies as a response to the global inflation phenomenon. Accordingly, global economic growth projections for 2022 and 2023 have been revised downward. As inflation will decline only gradually, given the price stickiness of its core components, there is likely to be momentarily a situation of stagflation, i.e. a combination of significant inflation and low or negative GDP growth.

We discuss how the current global stagflation experience might develop into one of a soft landing, a sharp downturn, or a deep recession. The evolution will depend on how fast inflation responds downward to economic deceleration. We therefore suggest framing the response in terms of assessing to where major economies’ Phillips curves have shifted.